Gaming has always been a release for me, something that helps me to cope with everything else that may be going on in my life. As a child it was something for my mind to wander in to while I felt outcasted by my “friends” around the neighborhood. Like most people my age I started with Nintendo NES, moved on to sega genesis. I had the gameboys and other handheld versions as well. It was when I got my own PlayStation that I really got sucked in.  I played final fantasy VIII and it changed my view on games. I enjoyed diving deeper into the storyline which lead me to find the earlier final fantasy games and other  rpg (role playing game) games like chrono cross, legend of the dragoon, and skies of Arcadia to name a few. As I grew up (so to speak) I started working and purchasing new games and new systems for myself. I usually bought the latest model about 1 year behind the release date to let the bugs get worked out, getting the Xbox, ps2, PS3, Xbox 360 or the best homemade CPU I could get. 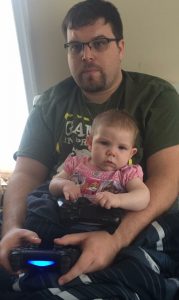 It wasn’t till my first marriage and my eldest daughters birth that I had to slow down and stop gaming as much as I was due to responsibilities rearing its ugly head. My ex-wife thought games were stupid and a waste of time. Funny thing is the worse our relationship got the more I got back into gaming and escaped the world that was crushing me.

I am now remarried to a remarkable woman that understands my gaming outlet and lets me be me. I also get the opportunity to pass on my gaming knowledge to her sons who seem to have some of the same gaming bug that I had and still have. I had always tried to get my eldest daughter to be into games but it never ended up being her thing. My stepsons, on the other hand, each enjoy gaming in their own way. The eldest loves trying to one up the other players and has recently discovered skyrim (his first rpg) that seems to have peeked his interest. 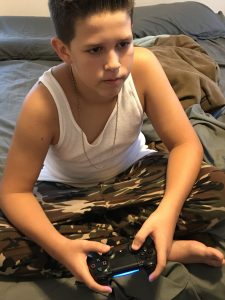 The youngest, on the other hand, gets really into the world and will start over to make the game more what he wants than the storylines themselves. I love having conversations about what they enjoyed or couldn’t get past or defeated. I am able to show them all the games I’ve fallen in love with over the years and enjoy playing and they have broadened the games I get into as they enjoy them. My youngest daughter also seems to enjoy watching dada play games and is learning if she moves the controller that the stuff on tv moves too. I have a feeling she will soon be stealing my game time for herself. 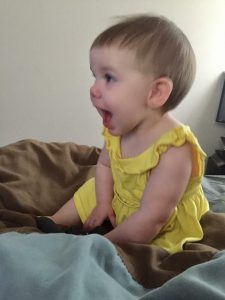 To be able to share a part of myself with all four of my children is a dream come true to me, even though I don’t get to play as much myself because the kids are on the tv. I enjoy watching them almost just as much.

I am Dan aka Proud Geek Daddy and I am your game master for this geeky blog experience. Welcome to the Dad side- I have food, fun, and Dad jokes. As I fly my geek flag proudly here I will be sharing about my blended family life, cooking, gamer life, books, movies, and any other geekery I can pull from my sorting hat. Thanks for stopping by and may the Force be with you.

Bringing up the past